People should pay more attention to these counterfeit $100 as these were circulated throughout the country without us knowing that these were all fakes and here’s what you need to know how to spot one.

The money that has been passed around in at least one area of eastern Tennessee has been made for movies and Police departments have received numerous reports from stores of customers trying to use the fake bills.

Belton Police Department Chief Robert Young said that “We got involved with one of the local banks who noticed an influx coming into the bank. So they notified us. Part of their protocol is to send it straight on to the secret service, but they wanted us to get involved because of local businesses. So at that point, we got out on the street, literally, door to door with our local merchants, our local businesses here, to say hey– we have some concerns that this may be something that you encounter in the near future.”

In the front of the $100 bill, a clear statement can be seen that states that the money is to be used in movies and another can be found at the back of each bill that says the money is not legal tender. Once people got this bill they will no longer pay attention in reading these statements this is why authorities want people to be more cautious and to pay close attention to large denominations that they get until all of the money is out of circulation. 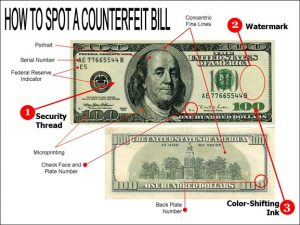 All lessons businesses hope everyone will learn fast, to stop the spread of the play money.

“At the end of the day when we tally up everything, it’s there and then we’re just out that money. I mean you wouldn’t want anyone to take your money, that’s just like giving me monopoly money. So you wouldn’t want somebody to do that to you, so why would you do that to us?” said Heather Lollis, Palmetto Roots Salon & Boutique.

If you believe that you received one of these counterfeit pieces of money you may directly go to a bank or a police department to have it examined.