The former Chelsea Lately star was pulling up a joke about how vaccinated she is and how Jesus loves her more because of the jabs she took, and right after she delivered the joke, she fell hard to the ground like a poly ball.

TMZ reported that comedian Heather McDonald fell hard during a show in Tempe, Arizona, but it was no joke … it was a medical emergency.

Eyewitnesses tell TMZ … the former “Chelsea Lately” star was headlining the sold-out show when she delivered her second joke … “I’m vaxxed, double vaxxed, boosted … and flu shot and shingle shot and haven’t gotten COVID and Jesus loves me most.”

As soon as she delivered the joke, she just collapsed and hit her head on the floor. Everyone thought at first it was all part of the act, but it was not. She was conscious, but clearly, all was not well. An EMT and a nurse happened to be in the audience … they rushed up on stage to provide first aid.

The 911 call came in as a seizure, but no one knows yet. An ambulance came and paramedics tended to Heather.

The former “Chelsea Lately” writer had been onstage for less than five minutes when she suddenly collapsed and suffers a skull fracture after the incident.

This is very interesting, God is putting them in situations where they can’t explain why it happened but only to pretend it was okay and everything is under control but boy, it’s not. 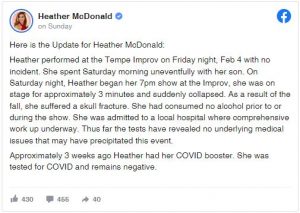 She recently claimed that she never had COVID and still pushed that she’s fully vaxxed and boosted.