The Good Samaritan who shot a thief and stopped the robbery is now in fear of his life after the family members of the suspect were lashing out, they’re just so proud of the criminal behavior of their own and so mad at the Good Samaritan.

I mean, can you even believe this? A Mobile, Ala. black mother is irate that some man shot her son after the wayward boy robbed a series of convenience stores with a gun in the Mobile, Ala. area.

Adric White, 18, has five separate robbery charges hanging over his head, but it was the latest that put that dangerous string to a halt. White was holding up a Family Dollar when a legally-armed man just so happened to pull up as the robbery was taking place.

The Good Samaritan, who requested he not be identified, told FOX10 News he was shopping at the Family Dollar on Stanton Road when he noticed a masked gunman leading one of the employees to the front of the store.

“He had the gun to his head. He had him on his knees,” said the man. “I drew my gun on him and I said ‘Hey don’t move.’ At that point he swung around and before he had a chance to aim the gun at me I fired. I didn’t want to shoot him.”

The Good Samaritan added that he wouldn’t have done anything differently. He said he didn’t know how it would have played out if he had not shot the suspect. White could have “fired a shot outside,” had he remained neutral. But “my daughter was outside.”

White, who was shot five times, was transported to USA Medical Center, where he remains in police custody.

Luckily for White, he survived. 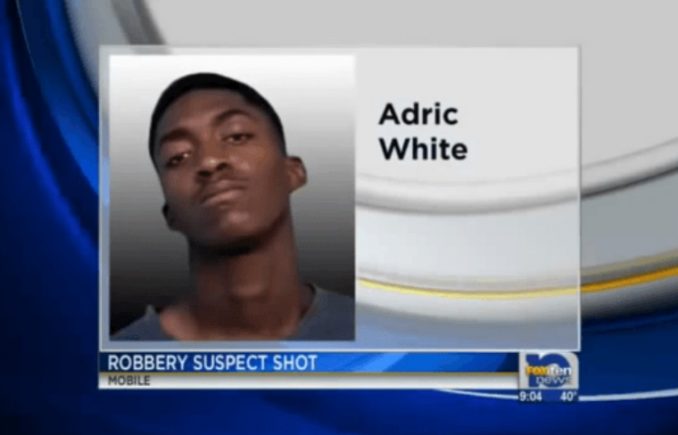 Taphaps has more of this story:

For sure the good Samaritan will not be charged with breaking any laws in the intervention, but the conflict does bring up an interesting question with the conflicting views expressed.

Does a concealed carry permit give good Samaritans the right to insert themselves into situations that do not directly involve them?

While most would definitely agree that, if White had pulled his gun on the Samaritan, there would be no question that the concealed carry permit holder would be right to draw his own weapon. However, if the altercation was between the suspect and someone else and there was no intent on the part of Adric White to shoot the customer, should the customer have the right to intervene by using lethal force? Obviously, the best option would be for young men like Adric White to never put themselves or anyone else in this position in the first place.