Michigan Gov. Gretchen Whitmer was recently reported to have taken a private jet to Florida several times when admonishing anyone who wanted to fly to Florida. Whitmer eventually admitted that she visited her father in Florida in March, but the tale continues to change.

Whitmer defended her trip to Florida at a press conference this week, despite the fact that she was urging people in her state not to go. She called her trip to Florida “a quick trip” that she “didn’t pay for with taxpayer money.” Whitmer has remained tight-lipped on who paid for the trip and the plane she flew on.

According to a source with the Detroit News, Whitmer flew on a private plane that is usually shared by three of Michigan’s most prominent political donors. The Nicholson family of PVS Chemicals, the Moroun family of Central Transport trucking, and the Cotton family, which formerly ran Meridian Health, are among those who fly on the Gulfstream G280 operated by Air Eagle LLC.

Whitmer’s office was asked by Breitbart News’ Kyle Olson why her story changed and whether she could provide any facts to show who paid for the private plane, but neither communications director Tiffany Brown nor press secretary Bobby Leddy responded.

Chris Gustafson, a spokesperson for the Republican Governors Association, said in a statement: “Michiganders are tired of the growing stream of lies coming from Governor Whitmer. Whitmer’s refusal to disclose basic details about her vacation to Florida is simply more proof that she is unfit to lead and it is time to Fire the Damn Governor.”

WHITMER’S HYPOCRISY IN TRAVELING DURING THE LOCKDOWN:

Trish Foster, Whitmer’s Chief Operating Officer, broke her own rules and recommendations by traveling to Florida with her relatives, where they were photographed without masks or social distance. 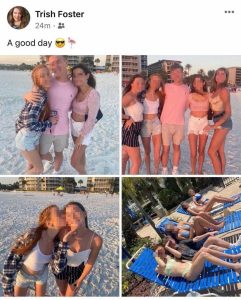 Shortly after the news about Foster emerged, it was discovered that Whitmer’s newly named HHS Director Elizabeth Hertel had also taken a family holiday to the free state of Alabama. Hertel was later confirmed to have been vaccinated, but he had only received one dose of the vaccine prior to leaving the state for some R&R.

Governor Whitmer replied to the news that her HHS Director was going south when Michigan was experiencing a COVID outbreak by saying, “I’m not going to get distracted by partisan hit jobs on my team,” adding, “There have never been travel restrictions in Michigan. What directors do on their personal time is their business so long as they are safe which is what we’re asking everyone in the state to do.”

It’s no surprise that Whitmer, Michigan’s Democrat governor, was unconcerned about her two top health officials fleeing the state as COVID cases soared to new highs—as it turns out, Whitmer was also secretly vacationing in Florida while ordering people of her own state to stay home to avoid the spread of the disease.

Reports from the Michigan Republican Party – Governor Whitmer made the trip about a month ago, according to a report by MIRS News, who verified it with her office.

Whitmer’s trip to Florida runs counter to her administration’s 14-month shutdown directives, lockdowns, and demands for Michigan residents to stay at home in order to stay healthy.

“Gretchen Whitmer’s blatant display of hypocrisy is an insult to every single Michigander impacted by her lockdown orders and travel warnings,” Ted Goodman, Communications Director of the Michigan Republican Party, stated. “Not only did Whitmer and her top staffers vacation to Florida, but they tried to keep it a secret because for Whitmer, it’s—rules for thee, but not for me.”