For some women, looks and body play a big role in their lives, a lot of them were going crazy and desperate to remain young and attractive. But as the years passed it also changes some people’s views and the typical idea of what beauty is all about.

A body modification enthusiast has shared a never-before-seen picture of what she looked like before spending $120,000 on transforming her look from head to toe.

Amber Luke, from Brisbane, Queensland, has splashed out $50,000 on nearly 600 tattoos, including blue ink injected into her eyeballs during an excruciating 40-minute procedure that left her blind for three weeks.

Though Amber has it all from a tall, slender, blonde beauty queen she still suffered from depression and suicidal ideation. She believed that what she has didn’t feel right in her own skin. As such, the Brisbane beauty set out to conform her looks to what she truly felt on the inside.

To totally change her whole self she endured some fairly harsh physical procedures. So far, she has had cheek and lip fillers, pointed ear implants, a breast augmentation, a Brazilian butt lift, and her tongue bifurcated. She now refers to her identity as the “blue-eyed, white dragon girl.”

“This was me at 18 years old,” she wrote. “I was so catatonically depressed, suicidal and was a walking dead girl. I was numb. I hated myself the majority of the time – that hatred ran deep. It tormented me,” she explained. “Now, I’ve totally transformed myself into someone I’m proud of being. I’m a strong woman who knows exactly what she wants and who she is.” 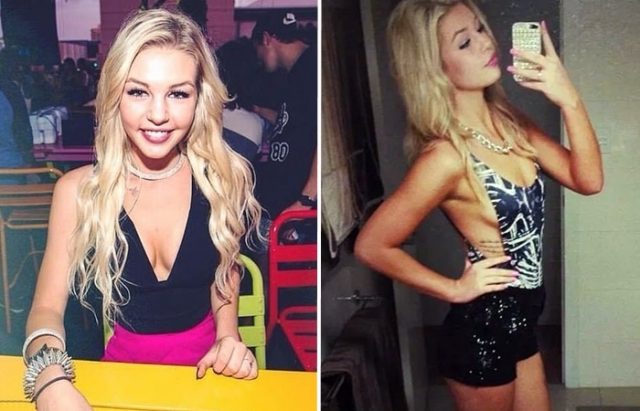 Amber Luke (pictured at age 14) says she wasn’t happy with her looks when she was younger. (Photo Credit: Instagram) 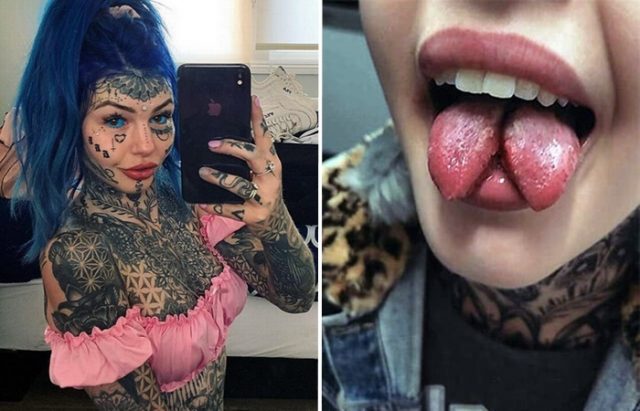 Despite others’ opinions, she believed that her transformation into a “blue-eyed, white dragon girl” has saved her from depression and a possible suicide. Though she had achieved what her heart desires, she also experienced losing her eyesight after the 40-minute procedure, which involved injecting blue ink directly into her eyeballs, left her completely blind for 3 weeks before she regained her sight.

“I can’t even begin to describe to you what the feeling was like, the best thing I can give you is once the eyeball was penetrated with the ink, it felt like [the tattoo artist] grabbed 10 shards of glass and rubbed it in my eye,” Amber said. “That happened four times per eye, that was pretty brutal. Unfortunately, my artist went too deep into my eyeball. If your eyeball procedure’s done correctly, you’re not supposed to go blind at all. I was blind for three weeks. That was pretty brutal.”

As she achieved the looks that she believed that truly belongs to her, she made a promised to her followers that she no longer wish to add another tattoo or undergo another surgery as she claims to finally be happy and contented with the looks that she got now.

People were saying that it’s only a matter of time; she might still having her next transformation if she wishes to. Only time will tell whether Amber keeps up with her new look or makes yet another drastic change.