Yesterday, the Ghislaine Maxwell case documents were unsealed showing that the DOJ was already aware years ago that Epstein and Maxwell were running girls as young as 12 but they refused to act for years.

It can be remembered that back in 2007, Epstein was given a sweetheart deal. Notes from a meeting in 2016 reveal that a “US Attorney has said [Epstein] could be prosecuted elsewhere.” which they failed to act for years, however.

They already aware of it since then.

Now, the DOJ published records unsealed by court order in the Ghislaine Maxwell case. These included a motion and numerous exhibits detailing what the FBI/DOJ – and in particular, the Southern District of New York – knew about the criminal activities of Jeffrey Epstein and Ghislaine Maxwell back in 2016.

In addition, the notes show that there were pictures of nude girls on Maxwell’s computer. Another note reports that Epstein was tipped off before the DOJ went to his house to look for evidence. All of his computers were gone.

Another note says “as young as 12 but younger the better” and then mentions Thailand and a handwritten note with girls’ names:

The notes also state that victim Virginia Roberts was “victimized summer of 2000 @ age 16.” The minor was “taken to NY for training by Maxwell + Epstein – how to servicemen.”

2016 Email to the DOJ’s Amanda Kramer (from victim’s lawyers) regarding developments in Maxwell case and thanking Kramer for meeting with them. DOJ’s Kramer is offered more info if she needs it. 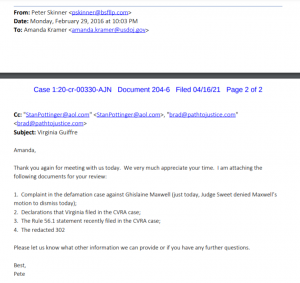 2016 email to DOJ providing contact info of an Epstein recruiter.

The main point is that the DOJ knew that Epstein was running girls as young as 12 and they did nothing for years.  Just another day of the DOJ protecting some individuals while attacking others based on politics.