Over the weekend, a local market was robbed, and the suspect is currently in the hospital after the store clerk is claimed to have shot him during the crime.

Just after 11:30 p.m., the Beaumont Police Department was informed of a robbery in progress at Everest Food Mart, 2810 Texas 69, on Friday. The store employee had called 911 and reported that a man was robbing the establishment with a knife, according to dispatch. The clerk informed the officers that she had shot the guy while they were en route.

Here’s what the City of Beaumont news release states:

“Dispatch advised that the store clerk had called 9-1-1 and stated that a man was robbing the store with a knife,. While officers were in route, the clerk advised that she had shot the suspect.”

The clerk and the suspect were inside the shop when the police arrived on the scene. The guy entered the business, flashed a knife, and “physically attacked the clerk before she discharged her pistol,” Police said.

In the news release, detectives obtained an aggravated robbery warrant for 62-year-old William Coleman, of Beaumont on Saturday.

During the incident, the clerk sustained several minor injuries, and Coleman was admitted to the hospital with serious injuries as charges are anticipated. 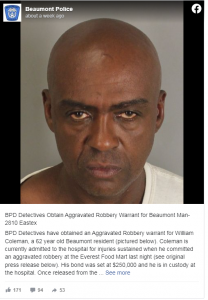 “His bond was set at $250,000 and he is in custody at the hospital,” the news release states. “Once released from the hospital, he will be transported to the Jefferson County Jail and booked in on the warrant. The investigation is on-going.”

Coleman was also arrested at the scene of a robbery at K & K Designs, in 2017.