On Saturday, about 450 unaccompanied migrant girls, ages 13 to 17, were abruptly moved out of a U.S. housing facility in Houston less than three weeks after it opened.

Reports say that authorities have been mostly tight-lipped about the closure but an advocate for immigrants claims it was because of some type of incident there Friday night.

Early this month the Department of Health and Human Services (HHS) opened the warehouse in response to the surge of migrants arriving at the southern border.

A video showed buses removing more than 100 girls from the emergency intake center on Saturday shot by ABC News. Until its closure, the facility had been run by a Houston-based nonprofit with no prior experience housing unaccompanied migrant children.

Sources familiar with the facility’s operation said the girls housed there, aged 13-17, were at times instructed to use plastic bags for toilets because there were not enough staff members to accompany them to restrooms. A spokesperson for the nonprofit would neither confirm nor deny these allegations to ABC News.

Cesar Espinosa, director of advocacy group FIEL Houston told the AP that “There seemed to be a lot of confusion as to what was happening,” while he relayed the information from the employee about Friday night. “The people that were there looked like they were in a sad stance, kind of with their head down and seemed like they were wiping tears away.”

The Houston Chronicle reported Saturday that the closure followed its reporting about crowding at the facility — and that an adult staffer from the U.S. Department of Health and Human Services (HHS) had died there Friday night in an incident that was unrelated to the transfer of the girls.
The girls at the Houston facility had been there since April 1. The site was called an Emergency Intake Site for Unaccompanied Children and was being operated by the National Association of Christian Churches (NACC), according to the AP. 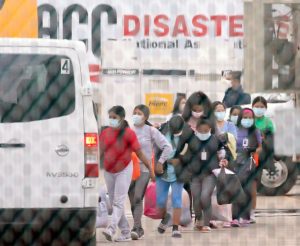 The Houston Chronicle reported Saturday that the closure was linked to overcrowding and that an adult staffer had died their Friday night. The cause of death appeared unrelated to the overcrowding, according to the Chronicle.

Democratic Rep. Sheila Jackson Lee of Texas said her understanding was that a federal employee serving as a volunteer at the center died Friday.
“That was the only reason that there were ambulances there,” Jackson Lee said, according to KTRK.

Espinosa told the station the conditions were “inappropriate for anyone, especially young girls.”

“There was really no space for social distancing … They were only allowed to get up from their cot to use the restroom as well as to shower,” he said.
“Everything that was being brought in was temporary. The showers were temporary, they were bringing in temporary restrooms, so this space was not equipped to house anybody, much less children,” he said.

A lack of outdoor space meant girls spent most of the day on makeshift cots surrounded by boxes intended to offer some semblance of privacy, according to the sources. The facility also suffered from overcrowding and failed to comply with pandemic-related distancing measures, the sources said.

Cesar Espinoza, the executive director of migrant civil rights organization FIEL, toured the facility in recent weeks as part of his work to ensure humane treatment for migrants, and said he saw “desperation” in the girls’ faces that were “unbearable and incredible.”

Espinoza said the warehouse space was “filled just with cots, where the girls were not allowed to get up, unless it was to shower, or to use the restroom. Even their meals were delivered to their cots.”

“[The girls] were more treated like merchandise rather than treated as human beings, as people who just went through a very traumatic experience,” Espinosa said. “I would not allow my 15-year-old sister to go and volunteer in a place like this because I don’t know what she’s going to see.”

Over the weekend, HHS announced it would relocate the nearly 500 girls to other facilities in the area, or family members or sponsors.

“The children being transferred are being moved to ensure continuity of care under conditions that meet our strict standards of care,” an HHS spokesperson told ABC News.