Milo, a rescued Beagle became a hero last month when he heard an elderly neighbor’s cries for help and rushed to save her.

An 85-year-old woman who had fallen hit her head, and becomes trapped was miraculously saved by Milo.

It all started when 20-year-old Makayla Swift, Milo’s parent, opened her front door to take him for a walk on the morning of November 4.

Swift says Milo bolted across the street and led Swift to the home of Sherry Starr, where he scratched at the side and front doors.

“He gets really serious at this point,” Swift says. “He is barking really loud.”

Swift says it was at that point she heard faint cries of help.

Starr had fallen in the early hours of the morning, hit her head, and become trapped between the shower and the toilet. Swift called 911, and EMTs arrived to help Ms. Starr, who was bruised but otherwise unharmed—thanks to Milo.

“When this dog sensed that his vulnerable neighbor needed urgent help, he led his guardian straight to her doorstep. PETA hopes this story inspires people to consider adopting an animal from their local shelter, where so many clever, loving, and tenacious dogs like Milo are waiting for a family to join.”

Swift got Milo through the Humane Rescue Alliance, where he came “from Tennessee as part of HRA’s WayStation transport program and was quickly adopted at our Subaru Shares the Love event in partnership with Fitzgerald Auto Mall,” according to the rescue group.

“He’s really, really full of energy. He loves people. Everybody that knows him loves him. He’s just so cute and sweet.” 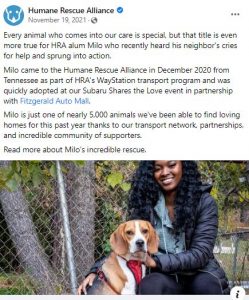 According to PETA, around 70 million dogs and cats are homeless in the U.S. at any given time. An estimated 10% of them end up in animal shelters, where many must eventually be euthanized for reasons including old age, injury, illness, emotional and psychological damage, and a lack of good homes.

PETA has since recognized Milo’s efforts with their “Heroic Dog Award,” and though his family already knew he was special, now he’s got a certificate and a bunch of new treats to prove it.