On Wednesday, a letter to President Joe Biden sent by hundreds of sheriffs from dozens of states, pushing him to solve the on-going crisis at the U.S. southern border.

This letter of request is spearheaded by Bristol County Sheriff Thomas Hodgson in coalition of 275 sheriffs that sent an open letter to President Joe criticizing his handling of illegal immigration at the U.S.-Mexico border. 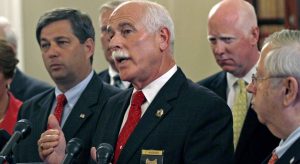 The letter warns of dangerous repercussions to allowing the flow of illegal immigrants into the U.S. to continue and signed by 275 sheriffs from 39 states. U.S. Customs and Border Patrol (CBP) reported taking a record number of 172,331 people into custody in March for entering the country illegally.

“We want the president to return to the policies that the previous administration put in place that were working to prevent illegal immigrants coming into this country, and to reinstate the rule of law in supporting the sheriffs in our efforts to keep our community safe,” Hodgson told GBH News on Thursday.

Barnstable County Sheriff James Cummings also signed onto the letter. His office did not respond to an inquiry from GBH News.

The letter comes as an uptick in migrants at the country’s southern borderpresents a significant test for the Biden administration. U.S. Customs and Border Protection apprehended nearly 172,000 people trying to cross the boder in March — the most in 15 years, according to administration officials.

“America’s sheriffs recognize that in order for democracy to flourish and remain healthy in our republic, we must uphold and enforce the rule of law,” the sheriffs wrote in the letter. “There is no place for injecting political agendas that diminish the safety and security of our nation. We cannot undermine the confidence and faith of the people in our basic precept of equal justice under the law. Our founders established the legislative branch of government to create and amend laws. Neither ‘We, the People’ nor the founders ever intended for those elected officials chosen by the American people to represent their interests to circumvent the legislature and decide for themselves what special class of individuals will be excused from abiding by our existing laws.”

The sheriffs accuse Biden and his administration of intentionally creating the crisis at the border. Law enforcement had warned Biden and his Homeland Security Secretary Alejandro Mayorkas when both were serving in the Obama administration what the effects of such border policies would be, yet the Biden administration persisted in crafting policies that would encourage mass illegal immigration.

“In the interests of ending the undermining of our laws and the increased risks to the safety and security of the people of the United States of America, we respectfully request that you immediately reverse course on your pro-illegal immigration policies, resume the border wall construction, and embrace the common-sense, public-safety-supporting border policies of the previous administration,” the letter says.

The Biden administration may be walking backs some of its border policies. Mayorkas told Immigrations and Customs Enforcement officials last week that the Biden administration was looking at closing “gaps” in the construction of the border wall started under former President Donald Trump, according to leaked notes from the meeting.

The Biden administration has advised Immigration and Customs Enforcement agents to focus their energies on going after migrants who pose threats to national security and public safety.

Hodgson said that approach is making the country less safe. He and the other sheriffs are calling for Bide to restore some of former President Donald Trump’s most signature — and most controversial — politics. That’s unlikely to happen in the current administration.

“The continuation of the plan to finish building the wall is critically important on the border in this overall security plan,” Hodgson said. “As well as the agreements that were in place with Mexico and with the northern triangle countries that kept these individuals in Mexico without letting them into the United States, so that we could have a better opportunity to control what we are unable to control now, and has turned into a real crisis.”

Hodgson accused Biden of reversing those policies for political reasons, rather than in the interest of public safety.

“Within two days [of taking office], with the swipe of a pen, he wipes out the progress that had been made that supported our efforts to keep our community safe and ultimately open the floodgates to let all of these people come into this country,” Hodgson said. “And he’s inundated us with an inability to be able to keep up with it.”

“The president has communicated quite clearly his decision that the emergency that triggered the devotion of DOD funds to the construction of the border wall is ended,” the notes say. “But that leaves room to make decisions as the administration, as part of the administration, in particular areas of the wall that need renovation, particular projects that need to be finished.”