The woman in the video below was the Yale Psychiatrist who would regularly appear on CNN and MSNBC, and claim that President Trump was “mentally unfit.”

It was also reported previously by Fox News about this quack’s claim.

This Stage 5 TDS sufferer had never even spoken to President Trump and she used her title and “professional power” to try and smear Trump, and the media happily promoted her efforts. 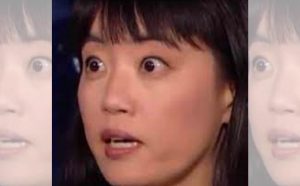 After spreading these sick lies and using her platform to smear the president, this lunatic has finally been fire and she was fired in part for falsely “diagnosing” President Trump.

Best dose of karma ever.

Bandy Lee, the psychiatrist who repeatedly diagnosed Trump as mentally unfit and dangerous, without ever even having met him, has been fired by Yale University.

At one point, Lee’s frequent long-distance diagnoses extended to Professor Alan Dershowitz. He wrote a strongly worded letter to Yale, which played a role.

This all began unfolding last spring, but we’re just finding out now.

According to the Former professor, Yale fired her over tweet on Trump, Dershowitz Brandy Lee MED ’94 DIV ’95, a formerly Yale-affiliated faculty member in the Department of Psychiatry in the School of Medicine, filed a complaint against the University on Monday alleging “unlawful termination… due to her exercise of free speech about the dangers of Donald Trump’s presidency.”

University spokesperson Karen Peart declined to comment on the specifics of the case. Yale was the only named defendant.
Lee’s complaint alleges that Yale fired her in response to a January 2020 tweet that characterized “just about all” of former President Donald Trump’s supporters as suffering from “shared psychosis” and said that Alan Dershowitz, a lawyer on Trump’s legal team, had “wholly taken on Trump’s symptoms by contagion.” Dershowitz responded to the tweet with a letter to Yale administrators, in which he complained that Lee’s tweet constituted “a serious violation of the ethics rules of the American Psychiatric Association” and requested that she be disciplined.

Diagnosing people from afar is a big no-no in psychiatry. They even have a description for that. It’s called the ‘Goldwater Rule.’

She was previously warned by her superiors at Yale about it, and it looks as though that was one of the factors in her firing.