A math teacher was kicked from his school after sharing his conservative belief in her private Facebook account.

After a backlash from a small alumni group over private Facebook posts, including several that highlighted her conservative beliefs, a math teacher at a Missouri prep school was dismissed.

Meanwhile, Her liberal colleagues who choose to share their progressive ideas on Facebook, have not been subjected to the same scrutiny, the Teacher claims.

In an exclusive interview with The Daily Wire, Beth Reams, a Math Teacher who worked at Pembroke Hill School in Kansas City, Missouri for 25 years, and also facilitated the school’s popular conservative club, told that she avoided politics because she didn’t think it was necessary.  However, she did use her private Facebook profile to voice her political beliefs, just like her colleagues did.

The news outlet reviewed a slew of Facebook posts and discovered that Reams frequently shared conservative-leaning memes. One post featuring a photo of Al Sharpton read, “It’s racist to think only white people can be racist.” Another said, “Good day, America!  What are we offended about today?”

One of Reams’ old students, a Pembroke Hill alumnus, made her a Facebook friend request, which her problems to arouse. Reams’ previous student, a young black woman, was constantly challenged and “went after” her for her conservative values. Ream was afraid to unfriend her former student even the Math Teacher’s friends encouraged her to do. Because she might accuse her of being “racist”

Pembroke Hill’s environment is “hostile” toward conservatives on the faculty and staff, as well as among students, according to Reams.

Students in her conservative organization began complaining after the 2016 election that teachers were injecting their liberal worldview into everyday conversations, she said. Apparently to one student, the school year began as the Teacher calls the former President Donald Trump a “coward,” and another claimed that the teacher praised 18-year-olds on their decision on the following 2020 election to vote Trump out of office.

Reams wrote a questionable post to her Facebook page in August 2020, while Pembroke Hill was still on summer break. “The horrific truth is … if people were told to get into boxcars to be taken to ‘virus protection camps’ many of them would rush to get in line,” the post read. 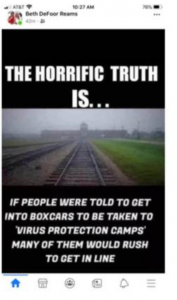 Pembroke alumni confronted her, alleging that her post had anti-Semitic undertones, but Reams meant the post in a different way, Ream told the Daily News.

She said, “I posted this because blindly following government mandates is what the Nazis did, I then was told it was read as the opposite, me saying the Jews followed blindly to their deaths. No thought of that ever entered my head, ever.”

To avoid misinterpretations, Reams chose to remove the Facebook post, but not before her former student could screenshot it and circulate it.

Pembroke Hill’s principal and the head of human resources requested a Zoom meeting with Reams in August of 2020 to discuss the problematic nature of her Facebook post. During the virtual meeting, Reams pointed out that the meeting was inherently political as other teachers have posted on Facebook about their political views and not been reprimanded for it.

She pointed out that there were no consequences for a teacher who compared Donald Trump to Adolph Hitler or a teacher who wore a Jacob Blake shirt with faux bullet holes on the back to school. 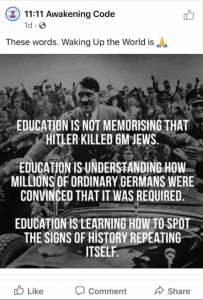 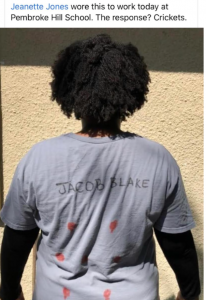 In an effort to save her job, Reams sent conciliatory emails to the Jewish community. The principal, who worked with Beth for 20 years, opted to give her a second chance, though she needed to fulfill requirements and make apologies.

Reams had to make a public Facebook apology that she was working with the school, a Jewish community organization, and the Midwest Center for Holocaust Education to become more aware of what she had posted. She also agreed to meet one-on-one with any parent who was concerned about their child being in her classroom.

The same stipulations were not applied to the teacher who made references to Trump and Hitler.

Reams told The Daily Wire that she met one-on-one with a Jewish family at Pembroke Hill. The mother of an incoming student allegedly condemned Reams for her post, and Reams apologized and promised that it would have no impact on her child’s ability to learn math in her classroom. Reams claims that the mother and child ultimately became friends with her and were some of her most vocal advocates.

Despite Reams’ best efforts, a vocal crowd of activists continued to call for her resignation. In January 2021, a local Kansas City newspaper linked her Facebook post to a student drawing a swastika on a desk in a different classroom. The Pembroke Hill alumni Facebook page also accused Reams of a litany of unsubstantiated claims. One student accused Reams of partying with students; another claimed that Reams was responsible for putting the school’s prom on the same day as a Jewish holiday.

On February 3, the school’s headmaster held another Zoom meeting with Reams regarding the accusations made in the alumni Facebook page. Reams maintained that the accusations were false and were made by the alumni page’s most progressive members. Approximately five hours later, the headmaster informed Reams that she would be placed on a few days of paid leave while the school conducted an investigation.

After over two weeks, Reams requested another meeting with the school’s principal, Mike Hill, and Director of Human Resources Vanessa Alpert. During her two-week absence, during which the school refused to disclose to students why their teacher was missing, Reams received dozens of emails from students and multiple calls from parents asking for assistance with homework and understanding material.

On February 18, Hill and Alpert held a virtual meeting with Reams wherein they asked if she wanted to have any Jewish families speak on her behalf to quell the angry alumni. Reams, who opted to record the conversation, said that she did not discuss religion with her students during her math class. Hill condemned Reams for taking a “color blind” approach to teaching.

The conversation went, in part:

Reams: I don’t know which ones of them are Jewish, but I have no qualms with you talking to any of my students. I’m very confident in that. …

Hill: I wanted to go back to something you said earlier … If I asked you today which of your students were Jewish, you probably couldn’t tell us … One of my concerns is that you don’t have that information … What I believe we’re trying to do … is create a division and be a part of a school where not only inclusivity is important, but also awareness …

Reams: I hear you. I just think that it’s very difficult, especially in math, to get to know a lot of things about the kids, and I think religion should not come up in our math class … I think where it becomes important for me to understand [who is Jewish] is when I do see an absence for a Jewish holiday … Then, of course, it would come on my radar. I think especially, this year in particular, every teacher would agree it’s been a lot harder to get to know our students … I think it’s important that when my kids walk in the room, I’m judging them on their math.

Hill: Do you know which [students] are Latino?

Reams: I couldn’t sit here and label my kids.

Hill: Do you know which ones are East Asian? …  The whole colorblind thing … is driving me crazy. Because I think it’s very dangerous.

Hill ultimately asked Reams to return to the classroom on March 1 and continued to insinuate to Reams that she was in good standing with the school. Reams told The Daily Wire that prior to the district’s spring break, teachers receive their contracts for the upcoming school year. Reams was told that because she had not been in her classroom for more than a month, she would not get her contract until later in the school year.

By March 25, Reams requested a meeting with the headmaster and Alpert to discuss her contract. According to Reams, she was forced to leave her phone and purse with the secretary during their meeting and was not allowed to have legal representation. Reams claims that during the first hour of the meeting, school leadership berated her for her Facebook posts while maintaining that it was not political that they disliked her views.

The school offered her a contract with base pay and asked her to sign a contract that removed her from all of her extracurricular duties, which significantly lowered Reams’ salary. After pleading with the school administration to add back the extracurriculars to her contract, Reams received an email from the Head of School Brad Shelley stating that she had been relieved of her duties, in part for bringing “negative attention” to the school.

Shelley said, “Even after the offensive social media posts you have made and the negative attention it caused you and the School, we tried to work with you throughout the year to get to a point where we both felt good about moving forward. However, it has been apparent during and after our latest meeting that the relationship between you and the School is fractured, at this time, it is best for us to go in our different directions, therefore, the offer of employment will not be renewed.”

In an email to The Daily Wire, Shelley said that the decision to relieve Reams was not based on “outside pressure” from the alumni group or negative attention from the media.

Shelley said, “While it is our policy to not discuss personnel matters publicly, we will in this instance make one clarification, The decision to not renew faculty contracts is solely the decision of Pembroke Hill School leadership and in no way in response to any outside pressure or influence.”

Reams told The Daily Wire that the school tapped a liberal teacher to replace her as head of the conservative club.