Everyone does and did stupid things when they were kids, but at the end of the day, there has to be some kind of a line of common sense.

When I was a teen, we had things that we would do but nothing that would come close to getting you killed or poison you.

That’s why when they were doing the ice bucket things a few years ago I was actually reassuring because it was just folks pouring cold water on themselves. Then the next week they were eating laundry soap. My neck broke from all the head shaking.

Too many “social media challenges” go far too wrong. Case in point, a stunt called the “roundabout of death” that a group of friends dared an 11-year-old boy to do resulted in some very painful injuries. Dawn Hollingworth shared the details of her son’s horrifying experience, as well as video and jaw-dropping photos of her son’s injuries.

Eleven-year-old Tyler Broome was with his friends in the park when they pushed him to try the stunt seen on YouTube. A person sits in the middle of a playground merry-go-round while it’s spun at high speed using the rear wheel of a motorcycle or moped.

It’s frightening that anyone would even entertain giving this a try, but a group of older teens encouraged Tyler to have a go. In the video footage taken, Tyler spins out of control and passes out during the stunt — all the while those involved are laughing. 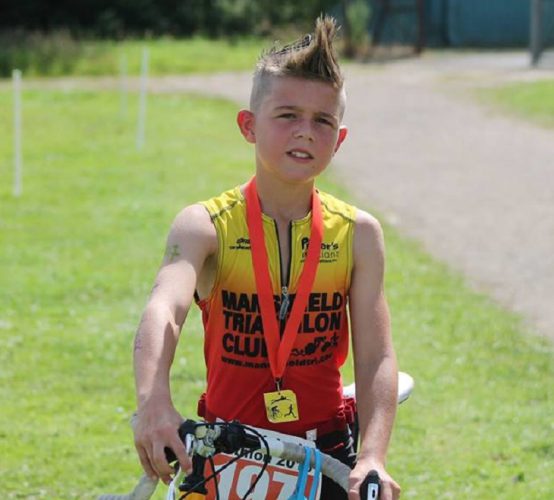 Tyler’s injuries were similar to those seen on fighter pilots who experience extreme levels of gravitational force. Tyler passed out from the stunt and fell off the playground equipment, but the worst part is that the kids involved left him alone in the park.

The boy had fluid and blood around his brain, causing his eyes to bulge and impairing his vision.

Dawn explained in a Facebook post: “My son has been rushed to one of the country’s top hospitals, Queens Medical Centre, for treatment for severe injuries. His injuries were so rare the staff have never witnessed such injuries and had to research it before they could treat him.” 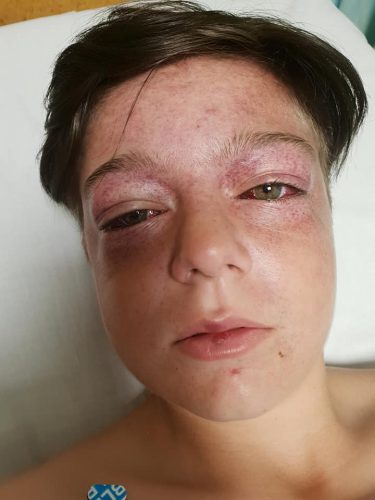 She also had something to say about the teens who not only harmed her son but left him there, as well as some kind words for the boy who called Tyler an ambulance.

She wrote: “As for the scumbags who call themselves friends who laughed so loud when he passed out and then left him alone unconscious in the park, I and the police know who you are. The guy with the bike who I won’t name is almost an adult yet he ran like a baby. A decent young lad who I only know as Liam… who entered the park and saw my son laying on the ground ran and called an ambulance, from the bottom of my heart I thank you so much Liam.” 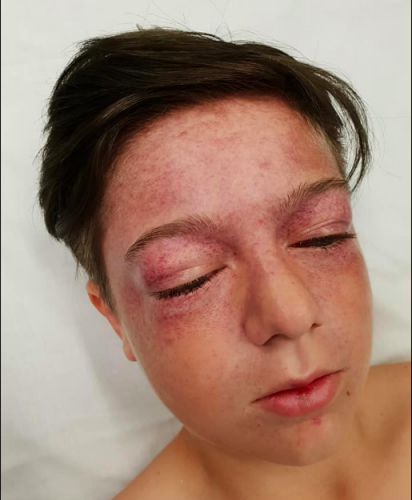 Dawn also shared: “I also thank the 3 lads who are setting up the fair on the park for informing the ambulance and myself of exactly what happened seeing he was left alone to suffer. Police now have the video and I have have not been able to get my son’s account of the incident due to his injuries.”