Generally, the relationship between the average resident of a neighborhood and the mailman is a pretty good one.

However, there are some times where your local letter carrier just does something that about defies description and good taste.

There was a neighbor of ours where we used to live that lived in a small apartment complex behind our home. We went over to drop something off to them that we were going to get rid of before a move and they asked us if we could take a few bags of garbage to the dumpster while they set up the TV stand we were giving them.

We drive it over and our mailman drives up to our car reading us the riot act about dropping something off if we didn’t live there.

We put the bags from our friend in the dumpster and drove away.

Returning to our house an hour or two later we saw two garbage bags sitting in our driveway. This goofball dug the bags out of the dumpster. Sometimes your mailman doesn’t represent the USPS all that well.

A Memphis, Tennessee homeowner’s hidden camera caught a mailman doing something completely unexpected while delivering the mail. Watch as the mail carrier walks up to the person’s porch with a handful of items and begins putting it into the box. Did you notice anything peculiar?

If you watch again, closely, you’ll see that as he hits the top step, a puddle appears.

Continue watching, and you’ll see a path of liquid that streams along the porch. That’s right, he peed on someone’s front porch while delivering the mail! He puts the mail in the box, then turns, walking around the trail of urine he just left.

It’s remarkable that he would empty his bladder in broad daylight and in full view of anyone who would happen to pass by. It’s pretty clear that he had no idea that the home surveillance camera caught him.

The homeowner posted the video on Facebook, writing: “We just moved in a month ago and my front porch may be a work in progress but however no one deserves this!! Mail man pissed on our front porch then touched our mail. #memphis.” They shared the video with various news outlets and noted that they won’t be touching their mail after witnessing this.

Susan Wright, a spokesperson for USPS said in a statement: “We are investigating the actions of our letter carrier revealed in the video. This behavior clearly does not reflect the efforts of the thousands of professional, dedicated carriers in our workforce. We are reaching out to the homeowner to offer our apology and assistance in dealing with this issue.” 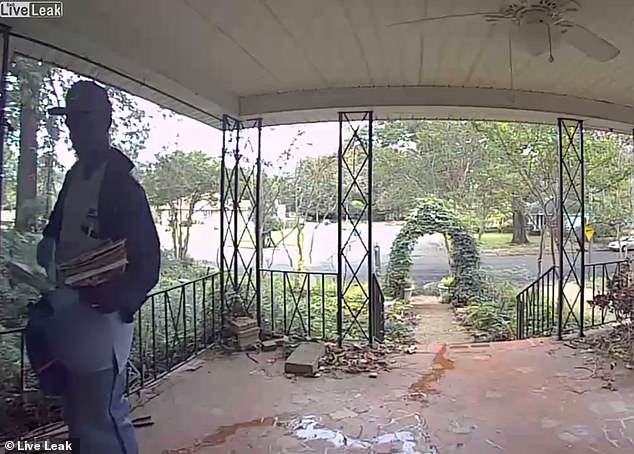 The statement added: “The Postal Service will take appropriate corrective action to address the situation with this employee. As a matter of policy, we are unable to comment further on specific personnel matters.”

Among the many people who weighed in with comments on the Daily Mail’s coverage of the video were those who were stunned by the man’s actions. One commenter noted: “Disgusting. If you have no respect for the homeowner, the folks who you deliver to, your employer — try a little respect for yourself and your mom. She deserves you showing that she raised you right.”