This particular group of people caught the attention of this Texas business owner and was tired of seeing their troubling situations. So he mans up and does something…

Things were going to be different in his Star Mart convenience store, and some things simply would not be tolerated. So, he hung a sign on his door, leaving onlookers stunned by his blunt words.

Frank Hemani, the owner of the Star Mart convenience store and gas station in Lake Fork, is on a mission to help feed his east Texas community.

The owner of the Star Mart gas station in the Lake Fork Community, near Emory, started offering those items at no charge at his gas station, for those in need. 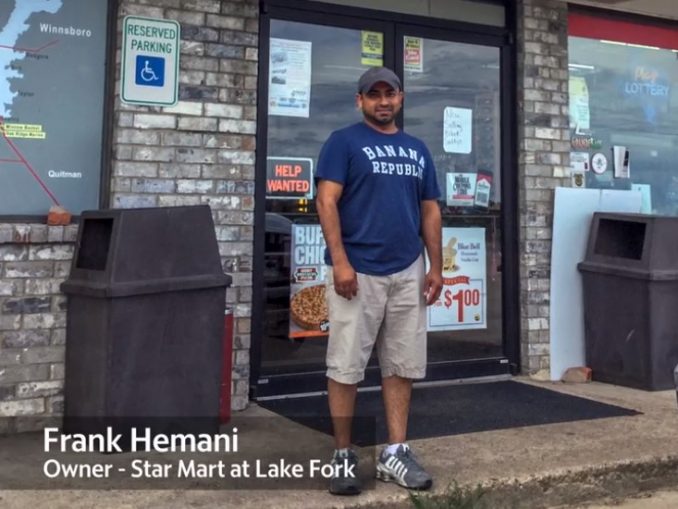 Hemani told KXXV-TV it’s not much, but says it’s the least anyone could do to help. Hemani and his employees are on a mission.

‘It’s just a couple of bucks, but somebody will not go to sleep hungry. If you don’t have money or a job, you can have a sandwich and a bottle of water for free,” Hemani said. 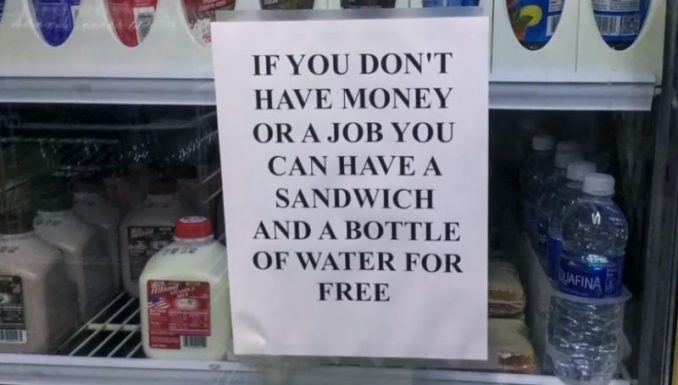 After seeing a video where someone did something similar, Frank posted a couple of signs in his own store. He says the video sparked something inside of him that made him recall what he’s dealt with before. He’s seen people in the area struggling to get by and he remembers what it’s like to go hungry. Deciding he doesn’t want to let anyone go through that, he figured he would try to help. Kindness and compassion aren’t for sale, though. They’re free.

So, a movement was started and all it took to make a difference was a bottle of water and a sandwich, which he began offering at no charge at his gas station for those in need. “If you don’t have money or a job, you can have a sandwich and a bottle of water for free,” one sign on a refrigerator case reads. According to KLTV, Frank has also posted a sign in his gas station that says, “If they are hungry enough, I will feed them. If they have children or child, I’ll definitely give them something to eat.”

Frank says it’s not much, but it’s the least he can do to help. “It’s just a couple of bucks, but somebody will not go to sleep hungry,” he said. And, those aren’t just empty promises. In fact, Frank once made a mom and her kids a pizza after the woman drove up to his store with her two hungry, crying children in the back seat. She didn’t have money to buy food for her kids, so Frank fed them for free, according to Myrtle Beach Online.

This story is an inspiration to everyone. Aside from providing food to those in need he also proved that there are still good people in this world and, just because they’ve hit rock bottom, that doesn’t mean they have to stay there.