A letter was sent over the weekend to the president of the Georgia Beverage Association requesting to have Coca-Cola products removed from their offices. This is after the company’s CEO criticized the state’s controversial new voting law.

The lawmakers wrote, “Upon the passage of the ‘Election Integrity Act of 2021,’ your company has made the conscious decision to perpetuate a national dialogue which seeks to intentionally mislead the citizens of Georgia and deepen a divide in our great State.”

“We have the responsibility to all of Georgia to not engage in those misguided intentions nor continue to support corporations who choose to. SB 202 expands early voting opportunities, provides a pathway to ensure shorter voting lines, secures the use of drop boxes which otherwise would be illegal, as well as several other provisions allowing all Georgians greater access to fast, secure, and transparent elections.”

“Given Coke’s decision to cave to pressure from an out of control cancel culture, we respectfully request all Coca-Cola Company products be removed from our office suite immediately,” they demanded.

“Should Coke choose to read the bill, share its true intentions and accept their role in the dissemination of mistruths, we would welcome a conversation to rebuild a working relationship.” 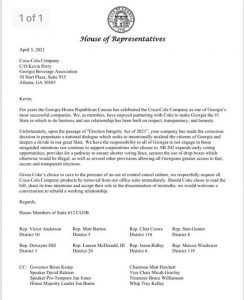 A number of corporations have blasted the legislation through Congress since it was signed into law last month. James Quincey, Coca-Cola Company chairman and CEO released a statement on Thursday bashing the reforms.

“We want to be crystal clear and state unambiguously that we are disappointed in the outcome of the Georgia voting legislation. Throughout Georgia’s legislative session we provided feedback to members of both legislative chambers and political parties, opposing measures in the bills that would diminish or deter access to voting,” Quincey said.

“Given Coke’s choice to cave to the pressure to an out-of-control cancel culture, we respectfully request all Coca-Cola Company products be removed from our office suite immediately,” the group said in a letter that was obtained by the Atlanta Journal-Constitution.

The beverage giant, which is headquartered in Atlanta and employs about 4,000 Georgians, has provided free drinks for lawmakers’ offices for decades, the AJC noted.

Meanwhile, Gov. Brian Kemp told reporters that Coke and other corporate critics of the new voting law “may be scared of Stacey Abrams and Joe Biden and the left, but I am not.”

The harsh words came after Coca-Cola CEO James Quincey put out a statement ripping the new law last week, and told CNBC, “Let me be crystal clear and unequivocal, this legislation is unacceptable.”

Quincey’s comments came after prodding by activist groups for companies to speak out.

Due to their opposition to the Georgia law, Coca-Cola was among the companies that former President Donald Trump called for Republicans to boycott over the weekend.

“Don’t go back to their products until they relent. We can play the game better than them,” the renowned Diet Coke aficionado said in a statement Saturday.

Former White House adviser Stephen Miller tweeted a picture of himself and Trump on Monday in the former president’s office in Florida, with what appeared to be a Coke bottle behind a phone on his desk.

After Delta Air Lines flipped its support for the bill, Republicans in the Georgia House voted to strip the airline last week. The measure never came up for a vote in the Senate.

“They like our public policy when we’re doing things that benefit them,” House Speaker David Ralston said. “You don’t feed a dog that bites your hand. You got to keep that in mind sometimes.”

On Friday, Major League Baseball announced that it was moving its 2021 all-star game and draft out of Atlanta in protest of the voting reforms after public pressure to do so from the White House.

“Over the last week, we have engaged in thoughtful conversations with Clubs, former and current players, the Players Association, and The Players Alliance, among others, to listen to their views,” MLB commissioner Rob Manfred said in a statement. “I have decided that the best way to demonstrate our values as a sport is by relocating this year’s All-Star Game and MLB Draft.”