Prince Andrew’s involvement with Jeffrey Epstein makes him now the center of controversy.

According to The Guardian reports:

The lawyer Mark Stephens said the use of the phrase “person of interest” could be interpreted as a “ratcheting up of the pressure to try and heap public opprobrium on him to the level where he has to give an account of what it is that actually occurred”.

Last week Virginia Roberts Giuffre, who has alleged she was abused by Epstein, filed a civil complaint against Andrew in Manhattan federal court. Giuffre alleges Andrew forced her to have unwanted sex at Maxwell’s London home, and in the US, on three occasions when she was aged 17. Andrew has denied the allegations.

The phrase “person of interest” is a term used by law enforcement for someone who has not been arrested or formally accused of any crime. It has no legal meaning, but it is understood it can refer to someone who may have information that would assist the investigation, including as a potential witness.

Prosecutors investigating sex trafficking allegations against Epstein and his associates have previously sought Andrew’s cooperation, and accused him of repeatedly stonewalling and declining requests to schedule any interview with federal authorities.

Below are Prince Andrew and Virginia Roberts pictures: 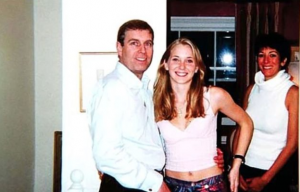 Ghislaine Maxwell, a longtime associate of Jeffrey Epstein, was arrested on sex trafficking and perjury charges, placing pressure on one royal to speak to FBI investigators. Lawyer Brad Edwards, who represents 55 women who claim they were abused by Epstein, who killed himself in a Manhattan last year, said he believes the Duke of York has information that will help his clients.

Edwards told the British news outlet that he has personally invited the royal “at least three times” to provide information but that he “flat out refuses.”

Epstein committed suicide in jail while awaiting trial last year. Meanwhile, Queen Elizabeth II’s second son quit his Royal duties after defending his relationship with him. He has since faced claims from U.S. prosecutors he is running shy of giving his version of events.

And as reported by The Guardian that at a press conference in New York where prosecutors detailed the allegations facing Maxwell, they urged Prince Andrew to come forward. “We would welcome Prince Andrew coming in to talk with us; we would like to have the benefit of his statement,” said Audrey Strauss, acting US attorney for the southern district of New York.

An unnamed source on his legal team was quoted as saying by the Press Association news agency, “The duke’s team remains bewildered given that we have twice communicated with the DOJ in the last month and to date we have had no response.”

Acting United States Attorney for the Southern District of New York, Audrey Strauss, told reporters they would “welcome Prince Andrew coming in to talk with us on Thursday.”

US Attorney Strauss’s remarks came following the arrest of Maxwell, the British socialite and close friend of the convicted sex offender Epstein was seized at a luxury hideaway in a small town in New Hampshire early on Thursday, as previously reported by 100% FED Up.

The prince has made no secret of his longstanding friendship with Maxwell or introduced him to Epstein. Prosecutors have continued their investigation and sought testimony from Prince Andrew. He faces accusations from Virginia Giuffre, who had claimed she was forced to have sex with him at Maxwell’s home in London when she was 17.

The Duke of York has strongly denied all claims that he had sex with a 17-year-old girl procured by Epstein. Pictures of the Prince posing with his arm around the girl’s waist forced him to give a disastrous TV interview to the BBC that was quickly followed by his standing down from all Royal duties in November.

As Per the Breitbart:

Strauss said: “The question is, Prince Andrew, when is he going to tell what he knows? He needs to do that. He needs to do it without delay. It is so traumatizing and difficult for the victims not to know the truth.”

The renewed spotlight on Andrew ends a rough week for the British royal family. In another court battle, legal filings by the Duchess of Sussex in her case against Associated Newspapers revealed she felt “unprotected” by the royal family from claims made in the UK tabloid press against her while she was pregnant.