Amid war and inflation fears, Joe Biden’s job approval falls to the lowest level of his presidency.

Biden has been elected as the 46th president of the United States and won in 306 based on all Electoral College votes. However, early in his presidency, Biden’s recent job approval ratings fall.

Poll after poll shows Biden losing support from every demographic in the book.

At 42%, President Joe Biden’s latest job approval rating marks his seventh consecutive reading below 44%, while a majority of Americans, 54%, continue to disapprove of the job he is doing.

In a new NBC News poll, seven in ten Americans expressed doubt about the president’s ability to deal with Russia’s invasion of Ukraine, while his approval fell to 40 percent.

The poll found that Biden’s drop in approval comes as a large majority of Americans continue to say the U.S. is headed in the wrong direction.

But the most disturbing number for Team Biden comes when looking at his stunning fall among Hispanics. According to Bloomberg, in the 2020 presidential election, Joe Biden won two-thirds of the Hispanic vote.

There are 16 counties in Texas where Hispanics make up at least 80% of the citizen voting-age population, in the latest data available from the Census Bureau.

Biden garnered a paltry 61 percent from Latinos in the 2020 presidential election.  But in the Quinnipiac poll released this week, Biden receives just 26 percent approval, a 43-percentage point drop in the span of 15 months. 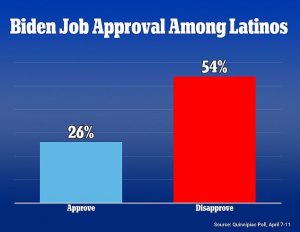 Latinos are the country’s largest minority voting bloc, compared with 2020, Biden is doing worse with Hispanics relative to how he is doing with voters overall.

An analysis from FiveThirtyEight’s Geoffrey Skelley found that Biden’s approval rating had fallen disproportionately among Hispanics over the course of his presidency.

The fact that the political preferences of Hispanic Americans are jumping around may get at something larger.