At the age of 79 years, 11 months, and 20 days, Joseph R. Biden Jr. has lived for a little over one-third of the United States’ history as an independent nation.

One way to think about that is: Biden really is quite old and outdoor activities are not for old people now.

And as the majority of Americans believe Joe Biden’s age is interfering with his ability to do his job as president, even also riding a bike, Biden couldn’t ride without taking a Tumble.

On Saturday, Biden fell when he tried to get off his bike at the end of a ride at Cape Henlopen State Park near his beach home in Delaware.

He is immediately surrounded by onlookers, but gets up and says, “I’m good.”

Joe Biden and his wife Jill spent the weekend at their beach house in Delaware following their 45th wedding anniversary, which they celebrated on Friday.

Biden being in mental decline has multiple incidents where he was fallen or tripped.

Last month, Biden became the latest U.S. leader to have a mishap while boarding or deplaning the official aircraft. America’s oldest president, fell three times attempting to board Air Force One on his way to Atlanta.

The 79-year-old had his hand on the railing when he tripped twice before falling over the third time as he flew up the stairs of the idling aircraft at Joint Base Andrews. 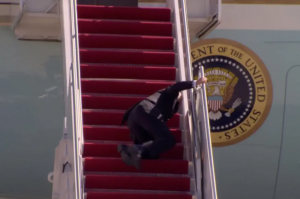 Joe Biden just fell 3 times in a row trying to go up the stairs to Air Force One pic.twitter.com/gTUTckUH32

In November, last year, Biden broke his right foot in a hairline fracture while playing with his rescue dog Major, causing him to wear an orthopedic boot for several weeks.

During an interview with CNN, Biden said,

“What happened was I got out of the shower. I got a dog and anybody who’s been around my house knows — dropped, little pup dropped a ball in front of me. And for me to grab the ball,”

“And I’m walking through this little alleyway to get to the bedroom. And I grabbed the ball like this and he ran. And I’m joking, running after him and grab his tail. And what happened was that he slid on a throw rug. And I tripped on the rug he slid on. That’s what happened. Oh man, not a very exciting story,” he added.

“I’m walking through this little alleyway to get to the bedroom and I grabbed the ball like this and he ran and I was joking running after him to grab his tail. And what happened was he slipped on a throw rug and I tripped on the rug he slid on” pic.twitter.com/o9ARgpJpfD

After videos of Trump predecessor cautiously stepping down a ramp at West Point went viral, he insulted the former President.

“Watch how I run up ramps and he stumbles down ramps. OK? Come on,” Biden said last September, 2021.