Everyone is calling the failed border enforcement a disaster including Biden himself. However; his secretary Jen Psaki denied the word just the day after Biden used the phrase in a speech.

Numbers of immigrants are continuing to flood across the border and making record numbers. The border facilities which were formerly known as cages are overcrowded. Immigrant children are going hungry, unbathed, and without adequate time outside or physical activity. The Biden administration has been begging volunteers to go to the border to assist in the crisis… which they deny is a crisis.

But what the Biden administration has to give as a solution to fix the problem is they don’t officially recognize it as a problem.

Now, he needs a plan to cope with it but if you think his border plan is a crisis, his solution is even worse. His plan is quite simple. He plans to flood the United States with illegal aliens or should I say, future Democratic voters?

From the pictures we have seen of the juvenile holding pens for illegal migrant children, the border policy of Joe Biden is inhumane and favors a comparison to your typical third-world countries. Children get to shower once a week and are often hungry and miserable. 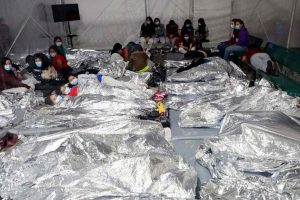 But hey, at least they all get books written by Kamala Harris. Manpower seems to be lacking in the detention facilities.

According to internal Department Homeland Security communications reviewed by Fox News, the department is developing plans to make the Alternatives to Detention (ATD) program more efficient… and by more efficient, mean increasing the number of migrants enrolled in the program.

This means they will be releasing more illegal immigrants into the United States.

“The Biden administration has made it clear that the border is not open,” a DHS spokesperson told Fox News. “Our policy is to expel single adults and families. In situations where individuals cannot be expelled, they are placed into removal proceedings and a custody determination is made, which could result in an Alternative to Detention program.”

“While many family units and single adults are being expelled via Title 42 health protections – which allow the U.S. to remove migrants, often within hours, due to the COVID-19 pandemic – Mexico has refused to take family units with tender-age children and the Biden administration is not applying Title 42 to unaccompanied children,” Fox News reports.

The policy only led to the migrant families being released into the United States.

The border wall also proved to be successful in blocking illegal crossings.

It was also reported that earlier this month, the current administration will resume the border wall construction to help mitigate the crisis.