Betty White’s team released a short video on Friday that the beloved star recorded just 11 days before her death at age 99.

The sentimental message was uploaded to White’s official Facebook page and had been taped in anticipation of what would have been her milestone 100th birthday.

The country has mourned the loss of beloved actress Betty White since her death on December 31, 2021. In a newly released video shot before her death, White sent her love back for the fans.

“I just want to thank you all for your love and support over the years,” the “Golden Girls” star said, sounding frail but upbeat. “Thank you so much, and stick around!”

White’s assistant, Kiersten Mikelas, wrote a message lauding fans for taking on the #BettyWhiteChallenge, which involved donating $5 to an animal cause in honor of White, who was a staunch animal lover.

“Good morning! As we continue to see number [sic] coming in from all over the world — it’s just absolutely amazing how much money all of you raised for the animals through #thebettywhitechallenge,” Mikelas wrote. “She could never have imagined such an outpouring of love and would have be [sic] so grateful to everyone.” 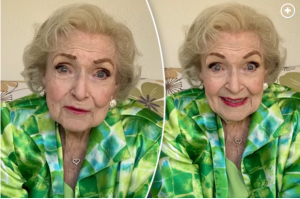 The showbiz legend, who worked in Hollywood for more than eight decades, died at her California home on Dec. 31.

Her cause of death was a stroke, which she had suffered on Christmas Day, according to a death certificate released earlier this month.