Sean Hannity continued his interview with Donald Trump on Friday.

‘That is a campaign violation’: Donald Trump attacks CNN https://t.co/VhDb8Dj6e4 via @MailOnline

‘What they’re doing is committing a major campaign breach.’ When you consider what they did, it’s hard not to be impressed.’

Trump, who has been at odds with social media firms since being kicked off their sites after the January Capitol riot, has called for further control of their operations.

He said that they were skewed against Democrats and that they needed to be investigated more thoroughly.

‘They have to be solid and can’t be overshadowed by Amazon, Google, or other companies that might take them off the air tomorrow,’ he said.

‘Antitrust is needed.’ It’s up to you to make a decision.

After Project Veritas creator James O’Keefe was permanently barred from Twitter on April 15 – one day after publishing an embarrassing expose on the network – the site was accused of defending CNN.

After being accused of running fake accounts, O’Keefe, 36, has threatened to sue the tech giant.

He had released another humiliating video of CNN camera operator Chester on a Tinder date with an undercover agent debating his employer’s attitudes toward Trump and Matt Gaetz the day before he was blocked.

It was evidence of the network’s bias, according to Project Veritas, which O’Keefe established. 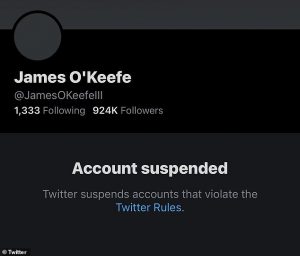 Any CNN reporter is effectively asking the individual what to say… It’s almost as if you’re directing them before they even open their mouths. For the most part, the only people we [CNN] can let on the air are people who have an established track record of taking the bait,” Chester explained. 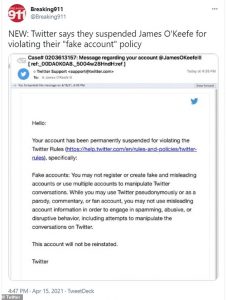 “I believe deception is an art… There are subtleties on how to exploit people, such as inflection and doing something twice… I mean, it’s enough to make a difference in the world, right?”

Chester revealed in their third shocking video that CNN is “trying to help” BLM by only airing reports that make white people look poor.

Project Veritas has released a third undercover video in which CNN Director Charlie Chester admits that the network is “trying to help” Black Lives Matter by defending their racial narrative.

During a chat with a Tinder date who turned out to be a Project Veritas reporter, Chester reveals that they have just been promoting reports that implicate white people.