A veteran of the 101st Airborne Division was kicked out of an Indianapolis zoo due to his “offensive” hoodie, which bore a picture of a 9mm cartridge and the phrase, “Just The Tip, I Promise.”

The 31-year-old US Army veteran Anthony Edmonson told the Indianapolis Star that he was enjoying a day at the zoo with his family when, after two hours, a staffer walked up to him and confronted him about his attire, saying another patron had complained, he was wearing a sweatshirt featuring the image of a bullet and sexual innuendo and was asked to leave the Indianapolis Zoo.

According to Daily Mail, He was asked to cover up the sexually suggestive message, take off the sweatshirt, or turn it inside out to hide the picture and words. But, he refused, citing his First Amendment rights, Edmonson was sporting a black hooded sweatshirt with a large bullet printed on the front with words that read: “Just The Tip I Promise.” 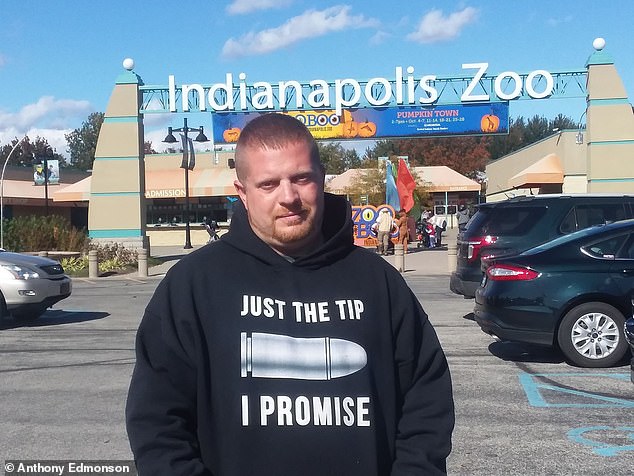 “They said they got a complaint about my shirt and asked me to remove it and I refused because it was my First Amendment right for freedom of speech.” He said.

Off-duty police officers serving as zoo security officials took Anthony Edmonson off the premises after he was asked to leave.

The zoo, a private institution not funded by the federal government, had the right to ask Edmonson to leave for violating its dress code, which prohibits visitors from wearing clothing with “offensive” language or graphics. The zoo’s dress code is posted at the front gate, the website and on the zoo map, the Indianapolis Zoo spokeswoman Judy Palermo said.

The zoo’s website reads, “We respectfully ask that you use modesty with regard to your wardrobe. Wear a shirt, pants, shoes, and clothing without offensive/vulgar language or graphics.”

Judy Palermo said, “Offensive language or graphics on clothing are not appropriate at a family gathering spot like the zoo, This guest was kindly given an opportunity to stay in the Zoo as long as he covered up the wording on his sweatshirt or removed the clothing or turned it inside out. He chose not to.”

“I wear that hoodie on a daily basis, One hundred percent of the time, most people think it’s a hilarious joke. Somebody probably didn’t understand that it was a picture of a bullet. That, or they’re very anti-gun.” Edmonson said he was surprised by the strong reaction to his sweatshirt.

Edmonson posted the photo to Facebook along with a profanity-laced message criticizing the zoo and the person who made the complaint. The response to his post became overwhelmingly negative.

He said, “A lot of people seemed to not like it, People were just so sheltered and they don’t understand it. I gave up trying to understand people. Other than that, I really don’t care. It’s not affecting my life any. I never really cared what people thought about it in the first place.”