It has been revealed that the National Institute of Allergy and Infectious Disease, which the supposedly infallible Dr. Fauci enthusiastically runs, In a nearly-satanic turn of events, Dr. Fauci has directed over $400,000 towards funding a series of experiments that saw fit to transplant FETAL SKIN into mice in order to supposedly study how prone the human skin is to infections.

Around a dozen scientists from the University of Pittsburgh conducted the quasi-demonic research, which was published in November of last year. These experiments clearly involved the creation of rat and mouse chimeras, kindly referred to as “models,” with “full-thickness fetal skin” to “provide a platform for studying human skin infections.”

Several images of rodent chimeras with fetal skin transplanted on their underbellies were taken, demonstrating a 12-week evolution when human hair began to grow on the fetal skin as if they were proud of their accomplishment. 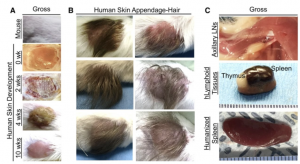 The fact that this study was secretly released at the time is more intriguing, it was only caught the attention of a critical mass of the population after being referenced by the Pennsylvania State Legislature when they conducted a hearing on the subject of fetal experimentation.

It appears that the scientists involved are either under the subject to a gag order or are not actually proud of what they did, seeing as none of them have yet to respond to queries for comment on their stunning and brave research, and neither did NIAID or Fauci, which seems odd given how much Fauci enjoys being paraded through the spotlight by his high-profile fawning sycophants.