After 40 long years, authorities have finally found her remains.

40 years ago, on June 5, 1982, Judith Chartier, 17-year-old from Chelmsford, Massachusetts was reported missing after she was at an outdoor party in Billerica, but she disappeared that night.

In 40 years’ time, the landscape has been totally different so as time passes by, the search for Judith just becomes difficult but thanks to our technology, diver with new sonar technology were able to detect and locate significant remains of Judith after 2 decades. 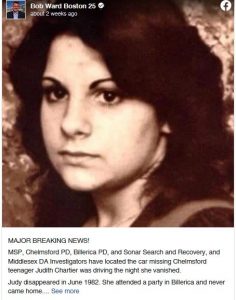 WHDH-TV reported that divers with “new sonar technology” found the parts 50 to 75 yards offshore in the water around 10 feet deep, and the car was identified through its vehicle identification number.

The following day, divers made more discoveries close to the location they’d searched the day before. They found clothes, a card purse with Chartier’s work ID, and human remains.

Middlesex District Attorney Marian Ryan was the person who has announced that “significant portions” of the teen’s car, a 1972 Dodge Dart Swinger, had been found by divers.

Ryan said, “They did recover a variety of human remains, In addition to those remains, they were able to find other items, including a few pieces of clothing and a purse or card case that contained a work identification that belonged to Judy Chartier.”

“We’ll be working over the next days and weeks both to make a positive identification of the remains and then to see if we can make any assessment as to what happened,” Ryan added.

And recently, Ryan has announced and confirmed that the remains recovered were Cartier’s after it was compared to dental records.

Ryan said in a statement:

“This is a very significant development in this case and we are still processing the car for any additional evidence, Sadly, this discovery comes after nearly 40 heartbreaking years of Judith’s friends and family missing her and wondering about what happened that day and we are committed to continuing the search for those answers.”

The family and friends of Judith were happy and yet brokenhearted about the news but they are thankful to finally have some closure on Judith’s disappearance.

Chartier’s cousin Heather Laine said, “It’s bittersweet, it’s hard to believe that she was so close all these years, To have her so close to home is kind of disheartening, but it’s comforting to know she was here all this time.”

“I think it closes old wounds, we are going to have to do a lot of healing, It’s been a long fight to try to find her, but it’s also going to take a lot of time to heal because now we have a place to bury her. We can finally grieve the loss that we haven’t been able to grieve,” she added.

This is so bizarre that up to this writing, her death is still unknown.