A “personal thought” beyond outrageous – shared by a former Minneapolis city employee who is now running for City Council. It’s radicals like Margarita Ortega who are doing nothing but causing more harm than good for everyone.

Ortega’s remark (shown below) suggests that instead of a “poor community,” an affluent neighborhood in Minneapolis be burned down. 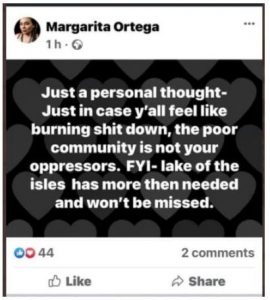 “Just a personal thought — the poor society is not your oppressors, just in case you feel like burning shit down. According to screenshots circulated widely on social media, Rita Ortega wrote on her personal Facebook page, which is under her full name of Margarita, “lake of the isles has more than [sic] required and won’t be missed.”

Before running for City Council, Ortega worked as a policy aide at Minneapolis City Hall. She has worked in city government for ten years, according to her campaign website.

Lake of the Isles is a popular tourist attraction that is surrounded by some of Minneapolis’ most opulent homes, which are owned by the city’s wealthiest residents. Ortega’s remarks were most likely made in the light of this week’s riotous activity in Brooklyn Center, where police killed 20-year-old Daunte Wright. Ortega appeared to defend her remarks in a follow-up tweet, claiming that the rich “have the insurance and means to rebuild.” “Division has been generated and continues not by my hands,” she added, implying that someone rich is somehow responsible for people sleeping on the streets. I’m not the obnoxious one who lives in multimillion-dollar mansions while others sleep in tents or on the street.”

“I went to pray for healing, only to be met with more pain of seeing another injustice, that our home is not ours, and the rich get to live in happiness and comfort where our ancestors used to pray and live,” Ortega said.

Margarita Ortega, running for #Mpls City Council Ward 9, suggests that those who want to burn things go to Lake of the Isles area.

These are your replacements for current incompetence. pic.twitter.com/9MGv8413Mc

“The only way forward is abolishing the police. No institution should be allowed to murder in our communities with impunity.”

The only way forward is abolishing the police. No institution should be allowed to murder in our communities with impunity. As a mother my prayers are with Daunte Wright and his family. He should be alive right now.