On Thursday, James O’Keefe, Conservative investigative journalist obtained and shared a video filmed in Texas which shows migrants being stashed under a bridge amid President Joe Biden’s growing border crisis.

The video shows that the bridge is used as a makeshift Customs and Border Protection processing center enduring inhumane conditions at the southern border and this scene could be even worse than the cages. At least they have walls and a real ceiling. It is subject to wind and rain and cannot be considered sanitary in any way.

The video, which Project Veritas reported was taken in secret by a source inside of U.S. Customs and Border Protection showing what appears to be people stowed away under the Anzalduas International Bridge in Granjeno, Texas — near McAllen.

Project Veritas said. “Migrants of all ages can be seen lying on dirt in tight quarters — with only space blankets provided for warmth.”

A reported 17,000 unaccompanied child migrants are in U.S. custody, including 5,000 being kept in overcrowded Border Patrol stations not meant for children.

In response to Biden’s invitation to surge the border, several migrant children have drowned trying to cross the Rio Grande. 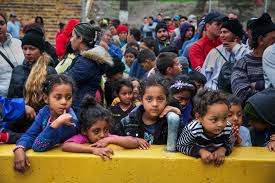 The Biden Administration is now accused by the former Acting Director of the US Immigration and Customs Enforcement (ICE) Tom Homan this week of hiding the truth about crisis and said Joe Biden “knew what he was doing” when he “sold out our southern border security and our national security to win an election.”

The rush to the border has been unprecedented over the past few years after President Trump worked so hard to get things he inherited from the Obama/Biden administration under control.

The illegals can be seen sleeping in the dirt where there is no running water for showers and where food has to be brought in because there are no kitchen facilities. It is a homeless camp for illegals.

Biden has been ineffectual in protecting our border and I don’t believe that is an accident, especially when you consider he is sending them to red states where they can vote illegally and dilute the legal votes of Americans. Illegal aliens, under a bridge, unsanitary, sleeping in the dirt.