Tattoos symbolize different meanings some different people around the world. When you walk the streets your eyes could catch a lot of people with tattoos on their skins. One of these people is a member of the gangs that circulating around the country.

Yes, it’s hard to deny that gang activity is one of the problems of the county, not just in cities like New York or Los Angeles but also in different states. In this article, you’ll learn how to recognize the signs of a gang member so you’ll know to avoid them to protect you and your family.

Here are some of the popular tattoos and their secret meanings according to Corrections USA: 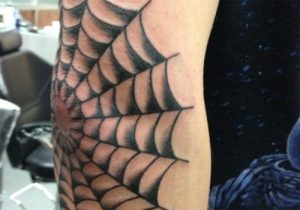 Cobwebs typically represent a lengthy term in prison. The symbolism is associated with spiders trapping prey, or criminals trapped behind bars.

This tattoo is commonly found on the elbow, signifying sitting around so long with your elbows on the table that a spider made a web on your elbow, though it can also be located on the neck.

If you see a multi-colored web, it’s probably not a prison tattoo; tattoo ‘artists’ in jail rarely have access to colored ink. 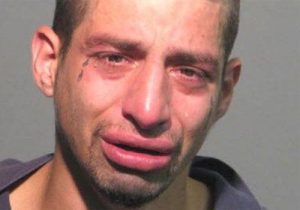 One of the most widely recognized prison tattoos, the teardrop’s meaning varies geographically. In some places, the tattoo can mean a lengthy prison sentence, while in others it signifies that the wearer has committed murder.

If the teardrop is just an outline, it can symbolize an attempted murder. It

can also mean that one of the inmate’s friends was murdered and that they are seeking revenge.

The teardrop has been popularized recently by rappers and other celebrities, but still remains a staple in prisons. Those who are newbies behind bars with a teardrop tattoo will make a lot of enemies, fast. 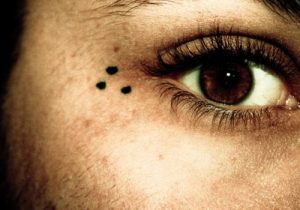 The three dots tattoo is a common prison tattoo that represents “mi vida loca,” or “my crazy life.” It’s not associated with any particular gang, but with the gang lifestyle itself. This tattoo is typically found on the hands or around the eyes.

These dots differ greatly from the previous tattoo – five dots represents time done in prison. Also known as the quincunx, the four dots on the outside represent four walls, with the fifth on the inside representing the prisoner.

This tattoo can be found internationally, among both American and European inmates. The dots are typically found on an inmate’s hand, between the thumb and forefinger.

Five dots on other parts of the body can have different meanings, such as an association with the People Nation gang. 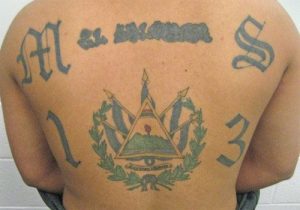 The MS 13, also sometimes seen just as MS or 13, is a symbol of the Mara Salvatrucha gang from El Salvador. Typically these tattoos can be found anywhere on the body, but are most often found in highly visible places like the face, hands or neck.

LA Mara Salvatrucha was started in the Los Angeles area by El Salvadoran immigrants. There are now MS-13 chapters all over the U.S. and even in Canada. Their industries range from dealing drugs to child prostitution.