“Greatest threat to internal security” of the United States, the group declared by FBI Director J. Edgar Hoover. A man who identified himself as Marxist-Leninist led the group and argued that “communities needed to unite together to fight capitalism” according to NBC News. The very definition of domestic terrorism.

The Black Panthers were (and still are) a terrorism organization albeit a less active one these days, acting instead through surrogates and pseudo-legitimate leftist organizations. It is considered by the Anti-Defamation League, the Southern Poverty Law Center, and the U.S. Commission on Civil Rights, as the New Black Panthers to be a hate group.

While the elder Black Panther party claims that the New Black Panthers are unrelated to them, there is no divorcing their common rhetoric, goals, and
“I hate white people. All of them. Every last iota of a cracker, I hate it. We didn’t come out here to play today. There’s too much serious business going on in the black community to be out here sliding through South Street with white, dirty, cracker w—- b—— on our arms, and we call ourselves black men. … What the hell is wrong with you black man? You at a doomsday with a white girl on your damn arm. We keep begging white people for freedom! No wonder we not free! Your enemy cannot make you free, fool! You want freedom? You going to have to kill some crackers! You going to have to kill some of their babies!”

It was remembered that Hampton was killed in a joint Chicago PD-FBI raid on a Black Panther “hang-out” apartment when officers were fired upon and returned fire, striking and killing Hampton among others in 1969. In 1970 the New York Times reported that “Police officials later described the shooting as a prolonged exchange of shots between them and the Panthers.”

The New York Times wrote that Police and the FBI were responding to,

“INITIAL INFORMATION THAT THE BLACK PANTHERS WERE THOUGHT TO BE STOCKPILING WEAPONS IN CHICAGO HAD COME TO THE CHICAGO OFFICIALS FROM THE FEDERAL BUREAU OF INVESTIGATION. THIS DISCLOSURE WAS THE FIRST OFFICIAL SUBSTANTIATION OF CHARGES BY BLACK LEADERS THAT FEDERAL OFFICIALS HAD PLAYED PART IN THE INVESTIGATION … THE TWO F.B.I. TIPS WERE ROUTINE TRANSMITTALS OF INFORMATION OBTAINED FROM A “CONFIDENTIAL SOURCE.”

Hampton admits to meeting with confirmed terrorism organizations the Weathermen (Weather Underground Organization/WUO) and the S. D. S. (Students for a Democratic Society), two months before his death surfaced in August 2020. Both groups were responsible for a series of bombings and violent clashes with police in the 1960s. Hampton sought to distance the Black Panthers from them.

But we cannot forget that the “freedom” Hampton was calling for already existed in that period…. in Mao’s China.

The Black Panther Party was founded by Huey Newton and Bobby Seale and or Self Defense in 1966. The group declined in popularity “as a result of deadly shootouts and destructive counterintelligence activities that exacerbated disputes between Panthers and other black militant groups.” according to Stanford University’s Clayborne Carson and David Malcolm Carson.

“The BPP dropped “for Self-Defense” from its name in 1967, but the group remained a paramilitary organization held together by Newton’s eclectic ideas, which were drawn from Marxist-Leninist and black nationalist writings and from the examples of revolutionary movements in Asia and Africa. Although Newton and Seale once gained funds and notoriety by selling books containing the quotations of Mao Tse-tung, the revolutionary tract that most influenced Panther leaders during the mid-1960s was Frantz Fanon’s Wretched of the Earth (1965). The party’s appeal among young blacks was based not on its unrefined ideology but on its willingness to challenge police power by asserting the right of armed self-defence for blacks. The explicit political goals of the Panthers were summarized in the last item of their ten-point Platform and Program:

“We want land, bread, housing, education, clothing, justice, and peace. And as our major political objective, a United Nations supervised plebiscite to be held throughout the black colony in which only black colonial subjects will be allowed to participate, to determine the will of black people as to their national destiny.”

The FBI placed Assata Shakur aka JoAnne Deborah Chesimard, a Black Panthers militant convicted of murdering State Trooper Werner Foerster in 1973 and hiding in Cuba since then. She has been on the terrorism watch list since 2005. 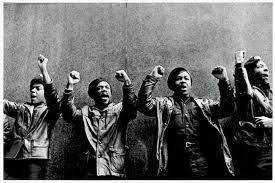 Black Lives Matter drew a clear line in 2020 of ideological and spiritual lineage back to the original violent terrorism of the 1960s when they placed quotes from the convicted murderer prominently on their websites and in “educational” materials supplied to NYC schools according to the New York Post. Recently, Atlanta BLM leader Tyree Conyers-Page, who refers to himself as Sir Maejor Page was arrested and indicted for fraud and money laundering.

“SHE WAS THE FIRST WOMAN EVER NAMED AS A “MOST WANTED TERRORIST” AND IS CONSIDERED LIKELY ARMED AND DANGEROUS.
“IT IS OUR DUTY TO FIGHT FOR OUR FREEDOM. IT IS OUR DUTY TO WIN,” SHAKUR IS QUOTED IN LARGE LETTERS ON BLM AT SCHOOLS’ HOMEPAGE.”

The Black Lives Matter Global movement of Patrisse Cullors is more subtle, more covert and more readily accepted by the Leftist Democrat-Socialist political machine that absorbed the Democratic party, while the New Black Panther Party and even the NFAC Militia are overt and present their agenda publicly and are reviled and rejected by society at large. It even cited by BLM Global Network the original “survival programs” and “free breakfasts” while announcing their blindingly racist $3 Million relief fund offered exclusively to black Americans.

Today, Hollywood is glorifying a dead leader of a domestic terrorist organization that lives on in multiple overt and covert successor organizations that are setting policy in Biden-Harris’ regime today. And NBC says “finally”.