Should a restaurant that serves bacon be allowed to display signs and/or advertisements that mention bacon? The U.S. Constitution says that it should, but Muslims in Vermont apparently disagree.

Case in point: After the Sneakers Bistro restaurant in Winooski put up a sign that read, “Yield for Sneakers Bacon,” an outraged Muslim woman took to an online community forum to complain about it. 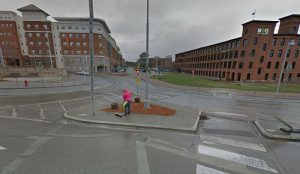 “Given the large number of Muslim families in Winooski, as well as many others who do not eat pork for a variety of reasons, it seems unnecessary for this insensitive business sign to be at the city’s main crosswalk,” the woman wrote.

Unfortunately, the restaurant’s owner basically let an acolyte of Shariah law bully him into submission, which is extraordinarily sad given that the U.S. Constitution affords him the right to display his sign.

When the owner of Sneakers Bistro heard about her complaint, he responded by taking down the sign.

But he also posted the following message to his Facebook page: 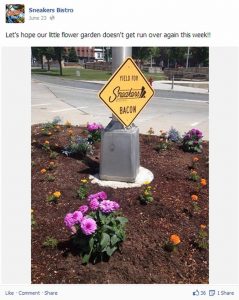 Notice how he mentioned “safety” concerns. This made it sound as if he feared the Muslims in Winooski would have taken violent action had he not removed the sign (H/T Young Conservatives).

According to the Burlington Free Press, the restaurant’s frequent patrons were NOT happy with his decision. Some threatened to never eat at Sneakers Bistro again. Another 50 left one-star reviews on the restaurant’s Yelp profile.

If Muslims want to live in the United States, then perhaps they should get with the program and stop bullying people whenever they’re offended.

What do you think?