In 1983, Kevin Clark made headlines for being a giant baby, weighing in at a whopping 16 pounds at birth.

Now, that giant baby has grown into a giant man.

Clark, 35, is all grown up — literally. He stands at 6-foot-9, weighs 300 pounds, and wears a size 17 shoe. He has to duck while walking through doors and showerheads only reach up to his chest. 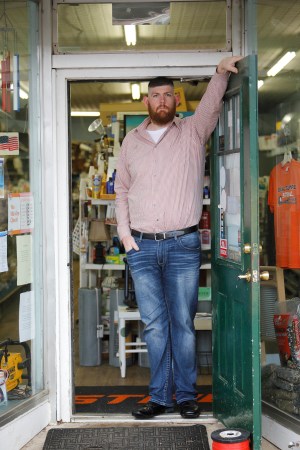 Clark recently told Inside Edition, which reported that he can’t fit into most doors, showerheads are too short for him, and he can’t fit inside many cars.

Clark gets just as much attention for his size nowadays as he did when he was an infant.

“There isn’t a day that goes by when someone doesn’t ask me how tall I am. I like to joke that I’m 5-foot-21. When people ask if I play basketball, I ask them if they play miniature golf,” he told the Post.

When he was in school, Clark said he didn’t play sports despite pressure from coaches. Later, he joined the U.S. Air Force and became a military police officer in Texas.

“There’s a natural tendency for people to think that because you’re tall, you’re in charge. I always say, ‘Everyone looks up to me,’” he joked.

I was a police officer for a while and everyone instantly would ask me questions, like I was in charge. I’d be in the same uniform as them, sometimes with fewer stripes,” Clark added. “Conversely, though, I was never able to hide in a crowd.”

The Post noted that when Clark was born, “Saturday Night Live” poked fun of his size during its long-running “Weekend Update” segment. “Their headline was, ‘We found where Jimmy Hoffa has been hiding!’ They were saying it was me — and I’d been hiding inside my mom,” he explained.