The idea that someone would refuse service to a police officer for whatever imagined slight is mind-boggling.

Granted, there are cops that do not live up to the standard that we would hope that they set for themselves. For the most part, we have good cops all over.

The problem is that the few that don’t do things the right way end up screwing over the ones that do so that they have to deal with the indignities of people that have an axe to grind against the police.

A cashier who refused service to a police officer is looking for a new job after the fast food restaurant where she worked gave her the boot.

The eatery’s position on police officers appears to be so strong that it even canned the manager who was on duty when the incident happened.

A Cook Out restaurant in Roxboro, North Carolina, fired the employee who refused to take the order of Sgt. Kenneth Horton, an Army veteran and Roxboro police officer.

Shortly after the incident occurred last week, news of the cashier’s obnoxious decision spread like wildfire.

“Unfortunately, it’s all because of a small action that could have been avoided.”

According to Hess, news of the blatant refusal percolated to upper management at Cook Out, who took brutally swift action.

The cashier was fired from the restaurant for her treatment of the police officer.

Hess claims the department took no action to alert Cook Out management about the employee’s behavior, instead insisting it was a decision from within the restaurant’s chain of command itself.

The manager of the location that fired the cashier said the employee had other options, and could have found another cashier to help the officer.

This wasn’t a good enough explanation for upper management.

Soon after, she found herself looking for a new job as well as after the district manager gave her the boot.

Her boss said she should have made it her priority to help the officer out.

“He told me that I should have went outside and got the officer’s attention and offer to take his order,” the fired manager told WTVD.

“I just gotta find something else. I got bills, kids and Christmas is coming up.”

Shortly after the incident, Cook Out posted a Veterans Day message in support of armed forces and first responders to its Twitter account. 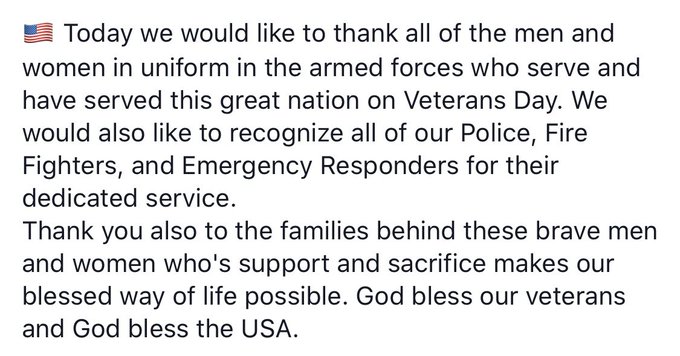 The restaurant chain is known for its burgers and unique combos, which offer quesadillas, corn dogs and chicken nuggets as sides.