There is nothing wrong with people disagreeing with each other, especially politicians.

Shoot, its disagreements that end up as discussions that people come to agreements on other more important things. We all need to work together, on both sides of the aisle.

The problem here is that you have people in Congress now that are making a grand point of trying to be as confrontational and contentious as humanly possible. It’s downright sickening the way some people act.

It’s no secret millions of Americans are frustrated with Minnesota Rep. Ilhan Omar.

After this past year in Congress, she has crafted for herself quite the reputation.

It seems she can’t help but offend and insult America and our allies. But there have always been rumors and evidence that she has skirted the law more than once or twice.

Now we’re getting early information that she might be reaching the end of the line.

A reporter just announced that he has submitted damaging information to the FBI. It looks like they’re acting on it. 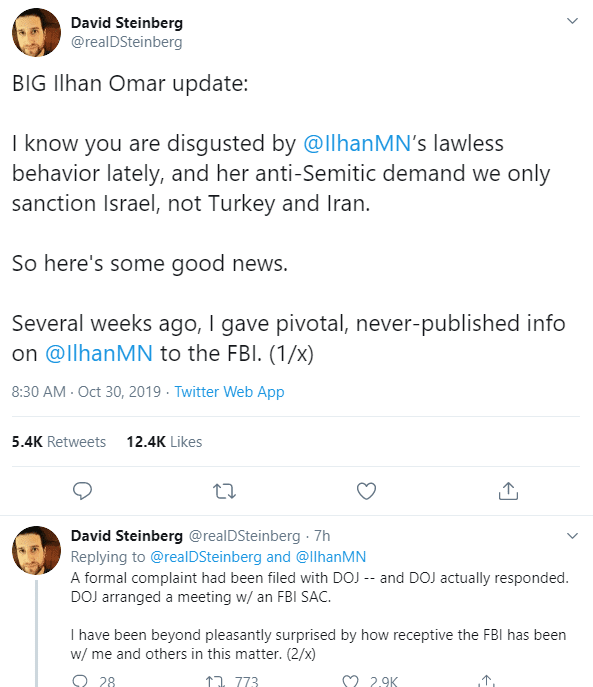 I know you are disgusted by @IlhanMN’s lawless behavior lately, and her anti-Semitic demand we only sanction Israel, not Turkey and Iran.

So here’s some good news.

Several weeks ago, I gave pivotal, never-published info on @IlhanMN to the FBI. (1/x)

A formal complaint had been filed with DOJ — and DOJ actually responded. DOJ arranged a meeting w/ an FBI SAC.

I have been beyond pleasantly surprised by how receptive the FBI has been w/ me and others in this matter. (2/x)”

Wow. It looks like David Steinberg submitted info about Omar to the FBI. He filed a formal complaint that suggests she committed “numerous felonies between 2009-2017.”

Could it be that her views go beyond just talk? Has she been engaging in unlawful activity over the last ten years?