The incident completely halted the operation and now, the company offered a $50,000-reward for information after a single phrase scrawled on the door of a portable bathroom.

Authorities with the Utah County Sheriff’s Office are investigating after racist vandalism was found Monday inside a portable bathroom at the construction site of the Meta, formerly Facebook, data center.

According to KSTU-TV reports, while completing construction at a Facebook data center in Eagle Mountain, a threatening slur was discovered written on the door of a portable bathroom. Worried about the safety of those who are working on-site, Mortenson Construction dismissed all 1,300 of its employees for the day and contacted the Utah County Sheriff’s Office to investigate the offense.

***Correction*** The construction project on the Facebook data center in @eaglemtncity is ongoing and is still under the control of Mortensen Construction. They discovered the racial slur and reported it and posted the $50,000 reward for information identifying a suspect. https://t.co/7QdwIPiTmx

Photos posted on Twitter by the UCSO showed the words “Kill a n***** day 11/29” written in what appears to be a black marker on the inside of the structure’s door. While the police authorities investigated the incident, Mortenson Construction gathered its workers, informed them of the threat, and sent them home as a preventive measure, KUTV reports. 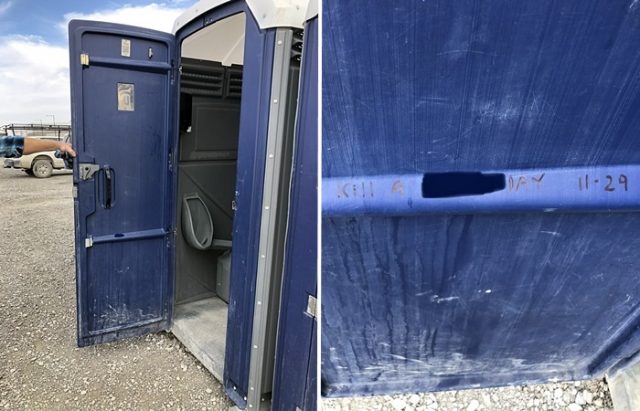 The construction company immediately released a statement denouncing the racist message and explaining the decision to dismiss all of their workers. Moreover, the company announced a $50,000 reward for information regarding the identity of the culprit.

“Mortenson’s priority is the safety and welfare of our team members and all people on our projects. We are investigating bias-motivated graffiti found today on the Eagle Mountain project site. We strongly condemn any form of racism or bigotry, and we have a clear, zero-tolerance anti-harassment, anti-discrimination policy,” the company said. “We stopped work today to immediately and directly address this situation with team members and project partners, underscore our team’s anti-harassment policy and restate our expectations for conduct on-site. There is a $50,000 reward for information leading to the identification of the individual(s) responsible.”

Facebook Inc., which recently changed its name to Meta Platforms, issued a statement denouncing the graffiti incident and pledging to make changes to operations going forward.

“Meta, formerly Facebook, has zero-tolerance for any racist acts,” a spokesperson for the company said. “While this is a challenge facing the entire industry, we’re working with our general contractors to implement measures that will help prevent them at any of our construction sites.”

Moreover, Sgt. Spencer Cannon, Public Information Officer, shared some photos of the graffiti on social media and was met with the reply, “white lives matter,” which he quickly condemned. Cannon suggested that white people aren’t under as significant a threat of violence because the graffiti isn’t directed at “crackers.”

“But we must recognize the fact that people aren’t generally writing bathroom wall graffiti that says ‘Kill a cracker day 11/29.’ So in that light your statement is insensitive at the very least and should be kept to yourself”

The Utah County Police confirmed that the threat wasn’t directed at a specific person and that investigators haven’t found any credible evidence that the threat will be carried out. It’s believed the vandalism occurred Friday night, but the authorities believe it will be hard to determine who wrote the statement because of the large number of people on the site.