An exclusive exposé from the Gateway Pundit with shocking NEW evidence about Dr.Fauci’s funding to China’s Virus lab.

The intro starts like this, “Please, correct us if we are wrong, but what we’re seeing is shocking.”

It was reported in early April that COVID-19 was a biological attack by the Chinese Communist Party.

Also, the Gateway Pundit reported that there is unequivocal evidence that COVID-19 was created by China’s military.

And yesterday another evidence shows on China’s military and its infiltration into US virus research.

Today we have more
Bin Gong is an Associate Professor of Pathology at the University of Texas Medical Branch (UTMB) in Galveston. 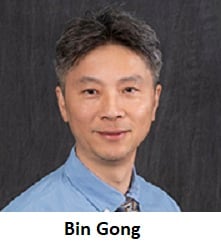 UTMB is also the home of the Department of Defense-funded Center for Biodefense and Emerging Infectious Diseases and has one of the few Biosafety Level 4 facilities for containing and conducting research on the world’s most dangerous viruses.

In 1988, while still at the Second Military Medical University, Bin Gong published an article for the PLA’s military intelligence journal.

Based on his 2019-2020 scientific publication record, it appears Bin Gong never really left the PLA’s Second Military Medical University and he may be using the UTMB as a training facility for PLA scientists, courtesy of the U.S. taxpayer.

Bin Gong has trainees with him at UTMB and is collaborating with scientists, both of whom are affiliated with Changhai Hospital in Shanghai, China.

Other documentation appears to confirm that those who have worked with Bin Gong in 2019 and 2020 are affiliated with the Second Military Medical University.

This is only the tip of the iceberg concerning UTMB’s apparent connections with the People’s Liberation Army and the Chinese Communist Party’s virus research program.

In our May 11, 2021 Gateway Pundit article, we showed the connection between UTMB Professor Pei-Yong Shi and PLA scientists at the Military Veterinary Research Institute and cited his appointment as an Honorary Professor at the Wuhan Institute of Virology.

Pei-Yong Shi has more extensive connections with the People’s Liberation Army and his activity with the Wuhan Institute of Virology is more than just honorary.

Pei-Yong Shi appears to have active collaborative work with multiple PLA scientists and the Wuhan Institute of Virology. 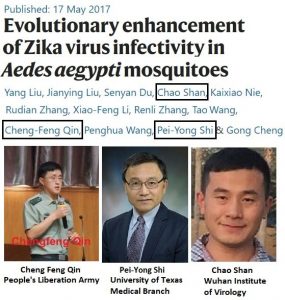 Since 2004, Anthony Fauci’s National Institute for Allergy and Infectious Disease has given Pei-Yong Shi over $5 million in research grants.

Since 2016, Anthony Fauci’s National Institute for Allergy and Infectious Disease has given Bin Gong over $2.7 million in research grants.

Lawrence Sellin, Ph.D. is retired from an international career in business and medical research with 29 years of service in the US Army Reserve and a veteran of Afghanistan and Iraq. His email address is [email protected]

The following is information just unearthed by COVID-19 detective @ZionaEmanuel:

Retweet this BLOCKBUSTER information EVERYWHERE from #COVID19 detective @ZionaEmanuel The other series of “gain of function” research funded by the National Institutes of Health & the U.S. CDC, support & patents going to the People’s Liberation Army. https://t.co/SCLdhvAlqL

This information appears to suggest an entirely separate “gain of function” Zika virus collaboration between UTMB and the PLA, apparently funded by the National Institutes of Health and the U.S. CDC and producing a patent that also appears to be assigned to the PLA for which the PLA connection of PLA scientist Cheng Feng Qin is deliberately hidden.