On the left, there are several pro-abortion arguments. They range from being honest to being demented, but all of them are ridiculous, which is why most leftists avoid discussing abortion.

However, in the aftermath of the leaked Supreme Court decision preparing to overturn Roe v. Wade; it has become one of the most important discussions taking place in the United States right now.

The House held an abortion hearing on Wednesday. The left’s depravity and incompetence were on full display. Witnesses to the Democratic cause were able to expose positions that will make your stomach churn with heated arguments.

Rep. Jamie Raskin (D-MD) attempted to end the debate by bringing up the tired argument about exceptions for rape and incest—which, as we all know, are very rarely the reasons for abortions.

Attorney Catherine Glenn Foster President & CEO of Americans United for Life, dropped the mic right on, well, where Jamie Raskin’s testicles would be.

This is exactly what Democrats do when confronted with serious questions about their views on abortion or any other topic. One of the main arguments used by the left to justify barbaric practices until birth is the issue of incest and rape.

Regardless of the fact that such cases represent a tiny fraction of abortions, with most estimates coming in around one percent, Democrats refuse to discuss the realities of what they actually support. They hide behind incestuous and rape concerns.

Raskin: “The GOP witness is calling for a nationwide ban on abortions with no exceptions for rape and incest.”

Foster: “If we added rape and incest exceptions, would you vote for it?” 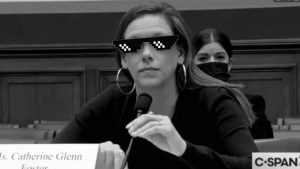 Why can’t he answer it? Raskin is well aware that incest and rape are red herrings. Even when they are engaged in the discussion, leftist imbeciles will disengage the moment they’ve been discovered to be ignorant buffoons and or political hacks.

Raskin was an intellectual moron who believed he could make a snide remark about Foster and get away with it. He had other plans, but she wasn’t alone. It’s priceless to see her response smile. Democrats must take responsibility for the policies they support.